NOTE: screenshots are from an earlier draft of the game

I am writing this game specifically from an autistic, chronically ill, bi/pan, polyplatonic, arospec, ace spectrum viewpoint, because that is who I am. I wrote this game to fill a niche that I feel still needs to be filled. While I know there are games out there that encourage unapologetic queerness, I feel like I’ve never seen a game that encourages autistic and other neurodivergent people to #TakeOffTheMask and not be ashamed to be their authentic selves?

In my own experiences as a queer, autistic gamer, I feel like I’ve gotten so much out of roleplaying games especially. Mostly LARP, but also tabletop games. They are a safe place to try out different social expressions and relationships without real world consequences. Messing up helps you learn, and can help to tell an entertaining story. I’ve also met so many other autistic and other neurodivergent people through LARP and tabletop communities. I think we’re attracted to these kinds of games more than the general population. So where are the games that celebrate us and help us grow without patronizing us? Where are the games that even mention us specifically and not as defective or limited? I feel like there’s so much possibility here, so I created the Neurodiversity in Games Jam as an excuse to make this game, and in the hope that other neurodivergent people could continue this conversation. Because this is just the beginning.

Also, the magical girl genre is awesome, and is especially attractive to the queer community, particularly femme people. A lot of personal meaning can be derived from the idea of transforming into a magical being and fighting evil with the strengths inside ourselves. We can change the world for ourselves and for others. We can become something greater than what the nagging voices in the back of our minds and outside ourselves say we can be. Our femme can be powerful.

While this is a game taking most of its inspiration from the magical girl genre of manga and anime, not all of the magical characters in this game are girls. All genders can be magical beings (known as MAGICALS generally, or specifically MAGICAL GIRLS, MAGICAL GUYS, and MAGICAL ENBYS (or any other gender term)) here. The main concept of the game is the metaphor of the CATERPILLAR, CHRYSALIS, and BUTTERFLY.

The caterpillar in the metaphor is people whose identities push them to the margins of a society that isn’t built for people like them. In the world of Chrysalis Cycle Rebirth!, everyone has the potential for magic, but most never discover it, particularly those who are centered in society. Caterpillars, on the other hand, hide who they are in an attempt to survive, not living as their true selves. Suppressing one’s true self uses up a lot of energy, including magical energy, which makes Caterpillars in particular draw energy into themselves like a vacuum. This energy vacuum makes them light up like a beacon to celestial beings who call themselves MENTORS, who are broadly known as butterflies, because they used to be exactly like the caterpillars.

Remembering what it was like, some mentors seek out these “beacons” of magical energy and understand the potential for their true selves to manifest. They know that caterpillars have the potential to chrysalize, and to eventually become a butterfly. They seek out and teach them to harness their magic, with the all-important lesson that the less energy they spend on masking themselves, the more they can use on magic, connection, healing, and growth. Once this realization is made, a caterpillar becomes a chrysalis.

The chrysalis (magical girl/guy/enby) stage is the time of transformation, during which powers manifest. In the chrysalis stage magicals are able to project their magical self outside of their body while asleep or otherwise unconscious. This avatar allows them to fight evil in whatever form it takes without any threat to their life... unless the location of their physical body is discovered. Magicals must use their powers to fight evil, do good, and make BONDS, eventually using the magical energy from within and drawn in from without to ASCEND. What they do after that is up to them.

This game is a work in progress, but I’ll be uploading drafts and asking for feedback as I go, so people who have pre-ordered the game can see it grow and even help it grow. There will be a version of the game in a dyslexic friendly font.

The current draft is at ~125 pages (including many pages of outlines and lots of tables that need to be filled in), and about 20k words of content, and the finished game will be somewhere between 150 and 200 pages (8.5” x 5.5”), possibly more. I hope to eventually run a Kickstarter for a print version of the game and for a zine of supplemental content written by other queer neurodivergent ttrpg devs. If you are a queer, neurodivergent ttrpg dev or are otherwise interested in this idea, contact me on Twitter @paradoxrevealed or email me at metaparadox11 AT gmail DOT com

In order to download this ttrpg you must purchase it at or above the minimum price of $10 USD. You will get access to the following files when they are released: 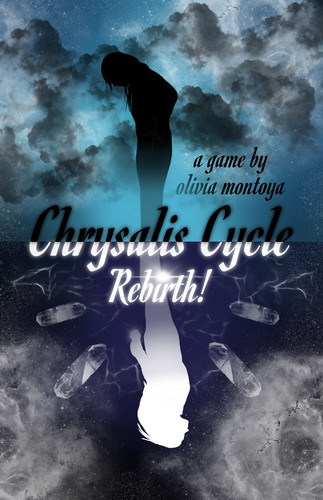 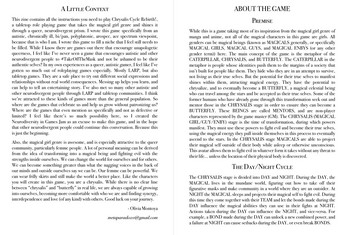 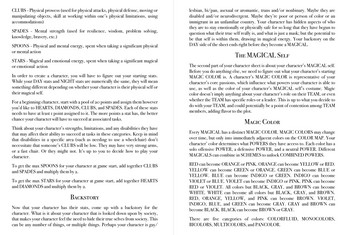 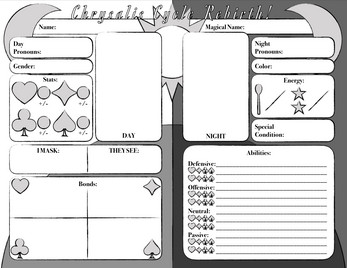